The Qajar kings, although not very well known among the Iranians, have left a great legacy of pride and beauty for the future, of which the Golestan Palace complex is definitely one; If not the brightest of them all. This complex was the place of coronation of several kings of the Qajar dynasty and the residence and sitting of the kings of this generation; Of course, the main date of Golestan Palace dates back to 998 AH and the reign of Shah Abbas Safavid, at which time several gardens were built by him and later during the reign of Shah Suleiman the Safavid, a madhouse was built in the garden; But today we do not see any trace of that madhouse and its modern buildings finally date back to the Zandieh era, of which Karimkhani’s solitude is one of the most obvious manifestations. Golestan Palace is one of the most magnificent palaces in Iran, whose name is on the UNESCO World Heritage List, and its unique and stunning design has made it one of the most popular sights in Tehran in the eyes of tourists. 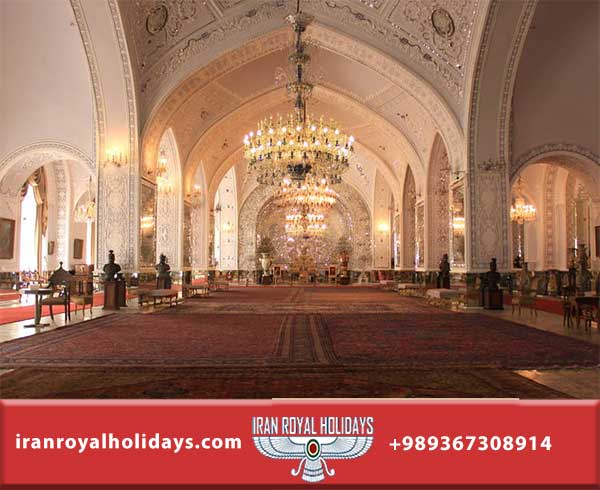 This palace is built in Iranian-European style and you will see western architectural elements in the place of the palace. Golestan Palace should in fact be called “Golestan Palace Complex”; because there are several mansions in this complex, among which we can mention the following buildings: the main palace, Shams al-Amara, Salam Hall, Mirror Hall, marble bed, pool house, Karimkhani privacy, windbreak mansion, ivory hall, diamond hall and hall برلیان. The description of each of these buildings requires a separate space. The main palace of Golestan Palace, with its infinite beauties, was the residence of the Qajar kings, whose visit to different parts of it requires a different time, and each part has an amazing world. From decorations and mirrors to colorful tiles and gifts presented to the Qajar kings are just some of the charms of this palace.

In addition, we can mention the dazzling infinity of the image in the unique hall of the mirror, which breaks the huge flood of tourists to visit with the highest manifestation of the art of Iranian mirror work. The very simple mirrors that we Iranians may pass by in religious buildings with indifference astonish foreign tourists who are not already familiar with this art; How much more does the mirror shine on the polished body of the mirrors in the golden light of light shining from the greatest hand-carved chandeliers; A miracle of light and color and radiance and repetition that until we are in the middle of it, we can never feel the sweet burden of its perfecting glory on our shoulders.

All these are just a few manifestations of the beauty of Golestan Palace that cannot be found anywhere else. The description of the Museum of Anthropology and the Sun of Amara and the Marble Throne and the privacy of Karim Khani should be left to another deadline. In any case, no writer can describe all this beauty. Golestan Palace complex is a beautiful combination of original Iranian garden and Iranian-European architecture and is a suitable place for photography and walking in the water and the pleasant climate of the garden. You will have no problem accessing Golestan Palace, as the 15 Khordad and Imam Khomeini metro stations are located nearby.

Among the three great palaces of Tehran, Golestan Palace is one of the oldest palaces in Tehran, which is in a special place in terms of architecture, tourist attraction and the value of works of art and history. One of the most interesting and spectacular parts of the Golestan Palace complex is the marble throne porch or Dar al-Amara, which is not without grace for any tourist. In the decorations of the marble throne porch, the artistic taste of Iranian artists in the field of plastering, masonry, tiling, mirroring, finishing and inlaying has been used to create a beautiful and pleasant atmosphere in the middle of Golestan Palace. The porch of the marble throne is one of the buildings of Zandieh era, which in the Qajar period was a place for performing ceremonies such as the coronation of kings, the enthronement of kings and official festivals.

The last official ceremony in this porch was held in 1304, which was related to the coronation of Reza Khan Pahlavi. Fath Ali Shah Qajar, in order to prevent the movement of the peacock throne, ordered a throne made of yellow marble from Yazd to remain in the middle of this porch forever. This structure later became known as the marble throne or Soleimani throne. The marble bed is located at a height of one meter from the floor of the porch, which consists of 65 large and small pieces of marble. Mirza Baba Shirazi designed the painting and the carving was supervised by Professor Mohammad Ibrahim Isfahani. During the reign of Fath Ali Shah and Nasser al-Din Shah, the architecture and decorations of this porch changed a lot to its current form.

Salam Hall is one of the halls of Golestan Museum Palace, which was built during the reign of Nasser al-Din Shah Qajard for three years (1256-1256) and is currently used as a museum by visitors. This hall was built from the very beginning to form a museum, which was later transferred to the building due to the transfer of the peacock bed from the old museum and the Hall of Mirrors, as well as holding special greetings (official meetings in the presence of the king where ministers and officials report on government affairs). In proportion to their position and age, they were brought to the width of the king). In it, over time, it was called Salam Hall.

In 1346, Mohammad Reza Shah Pahlavi used this hall for official ceremonies and also became known as the Coronation Hall due to the coronation of Mohammad Reza Shah Pahlavi and Shahrbanoo Farah in this hall. The architecture of Salam Hall was done by Sania Al-Dowleh, which has 9 windows overlooking the Golestan Garden from the south, and with an area of 1000 square meters, it is known as the largest hall of the Golestan Palace complex. In Salam Hall, valuable paintings of Iranian artists such as Kamal-ol-Molk as well as some exquisite Iranian objects are exhibited.

Perhaps the most important thing you can see in this hall is the Peacock Throne and the Kiani Crown, which was transferred to the National Jewelry Museum in 1981 and now only a copy of them, is on display for visitors.

Golestan Palace Pool House was built by the order of Naser al-Din Shah after his trip to Farangistan in the northern part of Golestan Palace complex and in the basement of the ivory hall of the building called the Pool House. On the north side of the basin was a fountain that originated from the Mehrgerd aqueduct. One branch of the spring water leads to the yard and the other branch leads to the middle pool (Golestan Palace pool house). This place was due to the cool climate of the place to rest the Qajar and Pahlavi courtiers.

Golestan Palace pool house was built in the Qajar period with a combination of European and Iranian architecture. This pool house was destroyed during the first Pahlavi period and became one of the museum halls. During the second Pahlavi period, ceremonies, celebrations, hymns and religious festivals were held in this hall. In recent years, a small pool in the style of an old pool house was built in the Golestan Palace’s pool house, and a museum was also set up to display paintings and objects donated by European kings. Currently, the courtyard area has become a permanent exhibition of paintings by European painters such as Simon van Goldbebs, Aivazovsky and famous Iranian painters.