If we want to know a little more about the sights of Hamedan, it is better to look at the history of this city which lies in the taropod of this city.

The history of this city is divided into pre-Islamic and post-Islamic categories.

There is no consensus on the construction of this city and the naming of this ancient city; but all historians believe that Herodotus, the first Median king, founded Hamedan.

Hamedan, which was known as Hegmataneh at that time, was one of the most important highways for trade caravans and for this reason it always hosted merchants who exchanged a lot of wealth in the form of goods from Babylon to Assyria and from Assyria to Babylon for trade. They did.

After the collapse of the Medes, Cyrus the Great chose Hamedan as his summer resort in 550 BC, and Hamedan was considered one of the capitals of Iran during the Achaemenid period.

The importance of this city at that time can be understood from the inscriptions of the treasury, the remains of the stone columns of the Achaemenid palaces, the clothes and the golden tablets discovered in Hamedan.

With the defeat of the Achaemenids and just at the end of the Seleucid period, the Parthians recaptured this land with their unique heroism and Hamedan again became a popular summer capital and many of Hamedan’s sights were built during this period.

It is interesting to know that this city was the last base that resisted the Sassanids.

History of Hamedan after the Arab invasion

After the defeat of the Parthians and the official beginning of the Sassanid dynasty, Hamedan or Hegmataneh was named Ekbatan.

During this period, buildings were built between Ctesiphon, the Sassanid capital, and Mount Alvand, but no information is available on the exact situation in Hamedan.

The city of Hamedan, which has been eaten by bloodthirsty people so far and has witnessed the ancient ups and downs of the Iranian dynasties, once again saw the fall of another dynasty in 23 AH.

This year, the Arabs captured Hamedan and declared their victory over the Sassanids.

From the middle of the third century AH, Sadat Alavi took over the rule of the city and ruled as Alawites, and the construction of the dome of the Alawites is a relic of them.

In 319 AH, Mardavij invaded this historic city with the founding of the Al-Ziyar dynasty and, under the pretext of his niece’s bloodlust, introduced the razor blade to many and caused bloodshed.

In the same year, the Abbasid Caliph, hearing the description of his oppression, sent an army to the battle of Mardavij, but this army accepted defeat between Qazvin and Hamedan.

But from the middle of the fourth century, destiny took a different turn. The Albuyeh family and then the Seljuks chose this city as their capital, and Hamedan returned to its glory days.

At the beginning of the Seljuk dynasty, many schools were built in this city and people seeking knowledge opened their feet to Hamedan; but a few sights of Hamedan related to this period are left.

The Mongols finally arrived in this city and began to plunder the poor of Hamedan.

This sinister period continued until the sixth Mongol Ilkhanate took over the government of Hamedan. The kings after Baidokhan also took the path of their ancestor and began to develop this city; But Timur’s army destroyed Hamedan again so that no one would hear a name from Hamedan until 300 years later.

Yes, this was a history that lies behind the sights of Hamedan. Join us to continue the story of this city.

The scenic attractions of Hamedan are abundant due to its pristine climate and history, and the most important and attractive ones cannot be seen in a one-day trip; so, it is not bad to think about renting a residence in Hamedan between our visits.

When the name of Hamedan is heard, two spectacular attractions are associated with it. One of these attractions is Ali Sadr Cave. 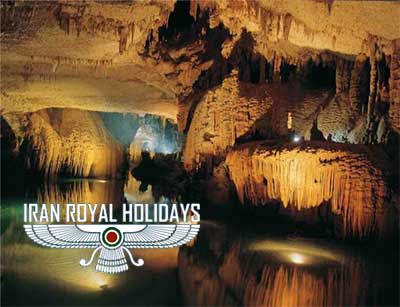 Ali Sadr Cave is one of the sights of Hamedan that if you are not afraid of closed space, you must visit it when traveling to Hamedan.

This beautiful cave is known as the largest water cave in the world and hosts many tourists from all over the world who carry luggage and travel to Iran to see it.

The storytelling of this cave is also interesting. The villagers used the cave as a dam in the distant times, and we do not know when, but in their identity cards it was called Ghar, Ali, and the dam, and since 1350, Ali Sadr’s name remained beautiful on this cave.

But the cave dates back to earlier times than this village and archaeologists have found stones there that date back to the Jurassic period.

If you go to this cave, be sure to take warm clothes with you because in the middle of summer and just when the heat is cold; the cave is cold and very dry.

Few people do not know the reputation of the Iranian physician, mystic and poet, Abu Ali Sina. In fact, the tomb of this wise sage is considered as one of the main sights of Hamedan, which is located in a square of the same name.

The tower that surrounds the tomb of Abu Ali Sina was inspired by the Qaboos Dome Tower, and if you have seen the Qaboos Dome, you know how beautiful this tomb is.

This tomb is considered a relic of the Qajar period and has many halls in its heart; but the most interesting of them is the South Hall. This hall is a place for storing coins, pottery, bronze and other discovered objects related to the millennia BC and the Islamic era.

Babataher’s two verses are the ointment for hurting hearts. It purifies your soul and psyche as if you had visited its homeland. One of the sights of Hamedan that you must visit is Babataher Tomb.

The tomb of this poet is decorated with delicate tiles and 24 beautiful couplets that give you a new spirit; but what distinguishes this tomb from its counterparts is the existence of a mystical poet whose life is named after him.

Babataher was a simple life and was cut off from all worldly belongings, and this world full of lust could not affect him.

In the past, the pious elders were given the title of Baba and the one who was cut off from worldly belongings and objected to the situation of the society of his time was given the title of naked. Despite the passage of centuries, we still called him Babataher Eryan for this reason.

The castle bath had two parts, hot and cold, just when it was used as a treasury. Before entering this section, you had to go through the vestibule, which first reconciled you with the cold bath and then guided you to the hot bath.

After the reconstruction and restoration of this building in 2008, its name and use changed to the Anthropological Museum of Hamedan.

It is interesting to know that inside the bathroom, there is a traditional dining room where bands sometimes come and perform.

Ganjnameh of Hamedan is one of the scenic areas of Hamedan that you should visit once in your trip to this ancient city.

Ganjnameh is in fact inscriptions on the high mountain of Alvand, which are from the period of Darius and Xerxes Shah In the distant past, just when traces of the lines and language left over from that time were no longer engraved in people’s minds, people thought that a secret had been engraved on the inscription that indicated a treasure.

In fact, Ganjnameh has placed this one of the best parks in Hamedan in its heart. The entertainment complex of this spectacular attraction includes exciting sports such as bungee jumping platform, telecabin, Tyrol flight, climbing wall, trial track, ranger, bowling alley, ski slope, sledding track and more.