Kashan, the historical city and the city of flowers and roses of Iran, is one of the main tourist hubs of the country. It attracts history and antiquity.
Kashan Grand Bazaar with magnificent very old architecture and stunning taste in very large building components, to discover very old and traditional shops in the alleys of one of the oldest markets in Iran, and even to buy the most beautiful and practical traditional and old souvenirs, there are several buildings Everywhere in the market history, it is largely impossible to hear the memories of shopkeepers who have spent their working lives under the roof of this market, writing about this truly “big” market in a short line. The handicrafts of historical workers and prominent late architects who have now been immortalized in their work can be seen everywhere on the market and can be touched with the eyes, hands and mind. The existence of a market from the Seljuk era indicates that the ancestors of the Kashani Iranians preserved the historical monument of this very old bazaar from the Mongol and Timur invasions and the looting of the earthquake (during the reign of Fath Ali Shah) and handed it over to us. 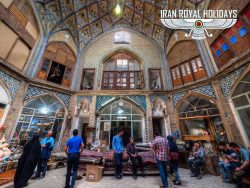 At the heart of history, even orientalists such as the great Edward Brown have praised the beauty of this market and called it one of the most beautiful buildings in the Orient. The rhythmic rhythm of the blacksmiths’ hammer, a voice that once made a poet like Rumi sing one of his most brilliant lyric poems in Konya (a treasure was created …), and the possibility of buying fully handmade copper utensils for cooking delicious food are attractions that interest those who are interested. They cannot resist art and cooking, or the “art of cooking.”
Each of the bazaar guilds has its own section, and with the help of local marketers, you can visit and shop at any section, including the blacksmiths’ market, the old-fashioned painters, and others.
The bazaar, as its name implies, is very large and extends from the vicinity of Kamal al-Molk Square to the Darvaze dowlat Square, and of course, in this grandeur, it has many beautiful buildings under its magnificent roofs; Including Mir Emad Square Mosque, Timcheh (is bazaars or small caravanserais) of Seyed Agha and Sabbagh and Amin al-Dawla, It is not possible to name them in the confines of these words, and basically not with the words, but only by closely observing the glory and splendor of this all-historical Iranian market can be truly touched.
Other attractions that exist in the traditional bazaar of Kashan are the caravanserais in which it is built, and among them, the Zoghaliha caravanserai, the No(new) caravanserai and Mir Panj are among the most important and famous caravanserais in the traditional bazaar of Kashan.
The importance of these caravanserais was due to the fact that the great merchants who came to this bazaar to buy accommodation in them, and the reason for this were their proximity to the main gate of Kashan. Now, if you pass the city of Kashan, we suggest you visit the traditional bazaar of Kashan and take whatever you like for yourself and your relatives. Iran Royal Holidays Tour Guides can lead you in every sections of Bazaar they explain all the details and of course will help you to buy souvenirs because one of the best parts of trips and tours are shopping.
Timcheh Amin Al-Dawla
Timcheh means small caravanserai. In modern times, caravanserais or small and covered houses are called. Timche’s space is more economical than caravanserais and has not been used to offer cheap goods.
Timcheh Amin al-Dawla, which is currently part of the Kashan bazaar, was built in the 13th century AH on three floors. After the destruction of Kashan Bazaar in the 12th century AH by an earthquake, during the reign of the Qajar kings, the letters of Fath Ali Shah and Nasser al-Din Shah were restored and Timcheh was connected to the bazaar through two doors. The designer of Timcheh Amin Al-Dawlah Ali Maryam Kashani is named after whom valuable works of his have been left in Kashan.
The roof of Timcheh is adorned with beautiful brick decorations and colorful tiles with a highly artistic artist who will enchant you for hours. This long and wide historical Timcheh was built by Farrokh Khan Ghaffari, nicknamed Amin al-Dawlah in the Qajar period, with a large central space covered with rooms around it, which is considered to be a place for buying and selling precious goods. And in 1353, it has been registered as a national historical monument.
Now, all I can say about the beauty of this Timche is that no one can understand all these indescribable attractions well until he sees all these artists up close. The bazaar and caravanserai are more eye-catching than ever at noon and when the sun shines, as the sun’s rays, which shine through the windows and pores into the caravanserai, create a very pleasing image, an image that wipes out the eyes of any viewer. He watches himself.
It is good to know that Iranian artists have thought of everything during the construction of this building and have very skillfully given a very good light to this building by using arches and placing windows and weights on the roof of this Timcheh. As mentioned above, Timcheh Amin al-Dawla is located in the middle of Kashan Bazaar, which is separated from the bazaar by two very large doors. From there you can go to Kashan Bazaar.