Kashan Grand Mosque(Jaame Mosque)
The city of Kashan is one of the cities of Isfahan province, and many of its historical monuments still retain their beauty and original form.
Kashan Grand Mosque is one of the oldest surviving works of this city, because the main building of this mosque is built on large fire temples that make any spectator faint.
Although the mosque’s current monuments are similar to those of the Seljuk dynasty, recent excavations have uncovered artifacts from the Al-Buwayh period.
Imaginary Iranian tile designs in the summer nave and brick designs are, at the same time, usury intelligence. One of the most important points of this mosque is the existence of two altars in which the qibla is one left and the other right. According to the locals, the first altar was used before the conversion of the Muslim qibla from Jerusalem to the Kaaba. Friday is recognizable and this shows that this mosque was built for the first time as a Friday prayer in Kashan. However, locals cite a Qur’anic verse in the altar, saying that the previous qibla was towards the Al-Qusay Mosque, and after changing the Muslim qibla to the Masjid al-Haram, the altar was demolished and a new altar built.
In the altar of the second qibla, there is a verse about changing the qibla from Al-Aqsa Mosque to the Holy Mosque, which visitors can clearly see in this mosque. The plastering of the second altar is one of the most unique examples of plastering in its time.
The brick minaret of the Kashan Grand Mosque is also unique in Isfahan province, as it is known as the oldest historical monument in Isfahan province, a two-shell minaret that is also the third oldest historical minaret in Iran. Over time, the Kashan Grand Mosque has been completely and partially destroyed many times, and major changes have been made each time it is repaired.
The main destruction in this mosque was in 1192 AH, when a terrible earthquake occurred and caused a lot of damage to this mosque. It took about 10 years for Abdul Razzaq Khan, the ruler of Kashan, to rebuild the mosque. In this earthquake, Karim Khan Zand brought construction workers from Isfahan and other cities to Kashan to speed up the reconstruction of the city and the mosque. 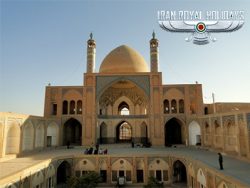 AGHA BOZORG Mosque
Kashan is a city full of magnificent historical monuments and one of them is “Aghabzorg Mosque and School” which is located in the historical heart of the city. The antiquity here, as in the inscription on the entrance, which is clear in the pictures, dates back to the Qajar period . This mosque and school are located on two floors and, like other historical houses in Kashan, have a magnificent architecture.
It seems very interesting to think that once upon a time there was both prayer and teaching here. Now, if you are interested in architecture, history and culture, we suggest you visit the Agha Bozorg Mosque in Kashan, which is one of the most magnificent works of traditional Kashan architecture, because it will be interesting for you to visit the historical complex.
The construction of this building, which was also used as a school, began during the reign of Agha Mohammad Khan Qajar and was completed during the reign of Nasser al-Din Shah Qajar.
The dome of the mosque is located on 8 huge pedestals, which has cooled the space around it in the summer. At the same time, the simplicity of the decorations, the tiles of the flower and plant design, and the flowers and birds that this mosque has are magnificent. Plastering, painting, Mogharnas work, Chinese knots, Yazdization and formalizations of the building of Kashan Aghabzorg Mosque also attract the viewers’ eyes at the same time.
The large pool and its side garden have helped to clean up the complex. What make this mosque spectacular are the exquisite decorations and elements used in it that dazzle every eye.
From Mogharnas work in the mosque to delicate plastering and eye-catching tiling, all and sundry have attracted the attention of this mosque and hosted domestic and foreign tourists. Agha Bozorg Mosque is also the only five-story mosque in the Islamic world, and this multiplies its importance.
The construction of the Aghabzorg Mosque in Kashan was built at a time when the first signs of the influence of Western architecture on Iranian architecture can be seen. Inscriptions such as Aali Qapoy Palace in Isfahan and Golestan Palace in Tehran are also inspired by Western architecture. Another group of buildings, especially mosques built during the reign of Mohammad Shah Qajar, were built with full inspiration from traditional architecture, especially Safavid architecture, among which we can mention the Imam Mosque of Tehran.
What distinguishes the Aghabzorg complex from all its contemporaries is that neither traditional architecture nor Western elements have followed in its construction. While this building is based on the principles of Iranian architecture, there are undeniable differences and innovations. This shows that the architect has paid attention to both the changes in his time and the consistent values of the architecture of the past.