If you travel to Kashan, be sure to visit two other beautiful cities.

If you are one of those people who like to go to natural attractions and experience the occasional presence in the arms of nature, this time choose Niasar Kashan waterfall to see.

Niasar waterfall is located 53 km northwest of Kashan in a mountainous area, located in the heights of Karkas mountain in the green and historical city of Niasar in the old neighborhood of Sarkamar (Shahid Beheshti) and shows its original and beautiful landscapes.

This mossy and 25-meter waterfall, with its easy access, attracts tourists and nature lovers, especially in the spring, when the waterfall waterfall is more watery than ever and has an attractive and refreshing nature (early May to late June).

The water of Niasar waterfall originates from the fountain of the hall (Alexandria) next to the four arches that are the Sassanid fire temple (Niasar Chartaghi), and it can be said that Niasar’s cool and clean waterfall owes all its antiquity, history and greatness to this spring.

. Two-thirds of the hall’s spring water flows into the Niasar Falls and from there to the Niasar Plains, a vast expanse of beautiful algae with a charming landscape for visitors, and a third of the water to a new neighborhood.

Due to the dissolution in the body and waterways of the waterfall, which is made of limestone and sediment, a unique collection of beautiful textures of stalagmites (drip or candle) and stalagmites (conical abstracts or sediments) has been formed that can play the eyes of any viewer.

There are 13 mills on the way to the waterfall, 3 or 4 of which have been destroyed, and the rest are nothing but an active mill at the foot of the waterfall. Other attractions of Niasar include the three-story cave of the head of Niasar, which is one of the strangest and most amazing human handicrafts excavated during the Parthian, Sassanid and Seljuk eras.

The proximity of the cave and waterfall to the Chartaghi Niasar is one of the proofs of this. Also, visiting this waterfall, you can visit the historical bath of Niasar, the garden of the hall, Chartaghi and the spring of Niasar.

It is one of the most famous cities in Iran and a subdivision of Kashan city, which is famous for its rose gardens, pure roses and special rose-picking ceremonies. This city has a relatively temperate climate and due to its refreshing waters, it has long been considered as one of the best summers in Kashan.

Now, if you want to know about the atmosphere here, we have to say that there are many flower gardens in Ghamsar, and next to each garden, there is usually a workshop for watching rose water.

In the years when the weather warms up earlier, like this year, the rose-picking season starts in mid-April and ends in mid-May, so if you plan to travel to these areas, you should start working sooner, otherwise you will miss seeing rose-picking.

In spring, and especially in May, Ghamsar smells more like spring than any other city in Iran and is full of the scent of roses. During this season, many travelers come to this city to witness one of the biggest traditional rose-picking ceremonies in one of its beautiful gardens, or to buy souvenirs of plant sweats such as pure and natural rose for themselves.

Sightseeing in the gardens of Golmohammadi and watching the Kashan rose watering can definitely make us feel good, and this is the most spectacular thing here. But if you want to explore more of the city, visit the Khatoon Ghamsar House, which is one of the most spectacular with its modern and at the same time Islamic architecture, and you can also see the peak of the art of bedding.

This building is modeled on the house of Pirnia and parts of the mirror work of Chahcheragh and Aali Qapo of Isfahan can be seen in it.

Haj Mandeh Ali’s house and Ehsaniha’s house are also among the other sights of Qamsar, which is one of the aristocratic houses. These sumptuous houses, with their magnificent porches, are 200 years old on several floors. In addition to getting acquainted with the two-thousand-year history and the traditional process of rose-picking, you can also visit the objects and documents for rose-picking in the Qajar building. 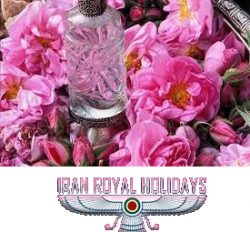 Like most cities, the city has a 10,000-hectare bird garden where birds from 17 countries live.

If you are a bird lover, don’t miss this place. During your trip to this city, you can use two hotels in Qamsar to stay, one called Golestan Hotel and the other Arg-e-Mohtasham Qamsar Hotel in Kashan. Golestan Hotel has more modern facilities, but if you want to stay in a different atmosphere as the window of your room opens to the garden, the latter will be more suitable for you. It can also be counted on local homes. If you haven’t visited Kashan, Qamsar and other cities where rose water is still harvested, you have until the middle of June.