Historical legends tell of the existence of an underground city in Noshabad. Recently, the accidental discovery of this city in the heart of the earth revealed the secrets of the 1500-year-old people of Noshabad.

Countless historical battles have made the construction of castles, shelters, defensive walls, watchtowers, and other structures in history commonplace. 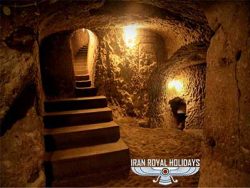 The underground city of Noshabad, also known locally as Ovi, is a refuge from 1,500 years ago that is now accessible through a passageway through the back alleys and covers an area of several thousand square meters (probably fifteen thousand square meters). The city is built on three underground floors with a depth of 4 to 18 cm by hand, and these floors are connected by vertical wells.

In addition to the Sassanid era, in different historical periods such as Seljuk, Safavid and even Qajar, the use of shelter in this city has been preserved.

Aqueducts, water wells and secret crypts were places that brought people to this underground city when foreigners attacked. Examples of other underground cities, such as the underground city of Montreal, never reach Nooshabad in terms of size and antiquity. When visiting this unique complex in Kashan, when it is located in an underground city, you will not hear any sound from the upper floor, which is the city. It is interesting to know that this damp and semi-dark city, which is actually the lower floor of Noshabad city of Kashan, annually 2004 was accidentally discovered during the drilling of water well and the collapse of one of the temples there.

The big secret that lies at the heart of the underground city is its air conditioning system. Is it possible to have several meters of air conditioning in the basement? Yes, the intelligent people of that time, with their techniques, were able to start the city’s canals from the ground with a U-shaped structure, which in addition to allowing people to pass through in times of insecurity, also allows air to enter and exit.

Its creators have cleverly placed the walls of the city next to the aqueducts so that cool air can flow through it so that people can breathe easily in the depths of the earth. In addition, stone vents have been installed on the air conditioning wells, which have been blocked with valves when feeling danger or smoke entering the floors.

At the mouth of each well, a number of rubble can be seen that, if the enemy intends to enter the spaces, they can hit the attackers with stones that have been used as tools of defense.

Another attraction of the underground city of Noshabad is its rooms, where families live in times of danger, most of which are built in nested form and with angled corridors that eliminate direct view with the next space.

The entrance to the city was made of artificial wells in the houses. When people entered the underground city, the person in front of them turned on the lights and the last person turned off the lights so that if the enemy was looking for them, he would not find a way. The corridors were designed in such a way that only one person from It passes by itself, and in some places it has to be bent, and in some places it has to be crossed in a busty way. 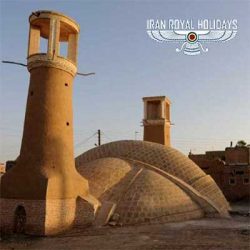 If you are planning to travel to Kashan these days, include a visit to the underground city of Noushabad to get acquainted with the history of our beloved land of Iran and the intelligent people of the desert people and visit this underground city of Kashan attractions .