Sookht-e-Negari one of the traditional arts of Iran

Sookht –e-Negari is an artistic woodworking which has long been practiced in various forms throughout history. The method of execution is often hot, by melting a metal in a fire and placing it on a stick. The metal could have had a distinct shape so that its design could be engraved on wood (such as the brass seal on which reed makers engrave their names).

It seems that the past of this art in Iran goes back to the comb and wooden doors found in the remains of the burnt city, but this art has spread not only in Iran but also in Peru and then ancient Egypt and in other countries such as Greece. They have benefited. Clearly, no request can be made to him. Of course, the origins of this Peruvian art are now 3,000 years old, while the artifacts found in the burnt city proves that this art is Iranian. 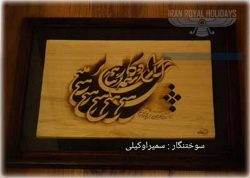 It has long been used for heating by molten metal in fire on wood, so that metal tools were embossed. It was heated in a fire and placed on wood or leather to seal. This art reached its peak during the Safavid era in Iran and was mostly used for the leather cover of the Quran, and of course, it was completely forgotten during the Qajar period.

During the reign of Queen Victoria, a device similar to today’s hovercraft was built and used to play pokerwork, which transferred the heat of coals placed in a tank by a device similar to today’s hooves. This revolutionary tool created the art of painting, and in European countries many artists turned to this art and even combined it with other wood arts. But this tool did not reach Iran, and what is clear is that the history of this art in the contemporary era does not reach more than 15 to 20 years. 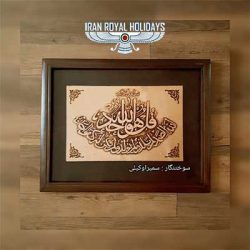 Sookht-e-Negari is one of the artistic disciplines that can be considered as a kind of fire painting.

Sookht-e-Negari  is one of the traditional and of course forgotten arts of Iran, which has been revived with the help of Professor Nedaf. In this art, accuracy has a high position. The proportions of the contrasts applied to the wood are also very important. In this art we use two main colors, brown and gold, and the different spectrums of these two colors will determine the beauty of the work. It’s the only art that a burnt-out artist has to come up with after choosing the right design. 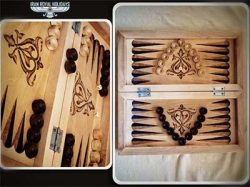 Samira Vakili was born in 1988 in the city of Isfahan.Craftsman in the field of wood and reed fuel. Design and burn different designs such as traditional and Islamic motifs, miniatures on a variety of wooden items as well as a variety of musical instruments.Start of activity in 1391 experimentally and self-taught and then obtain a production license from Isfahan Handicrafts Organization.Participate in more than 10 solo and group exhibitions in Isfahan province and other provinces.Attend a wood art exhibition at the invitation of the South Korean Embassy.Achieving the national quality mark of goods in 2015.Also activities in various fields of traditional design, gilding, calligraphy.