Tabriz, a metropolis in northwestern Iran with its sweet and hospitable people, has long attracted many tourists from inside and outside the country due to its many historical monuments such as mosques and old houses. The first Iranian cinema, the first printing house, the first public library, the first weapons and ammunition factory are just some of the industries and facilities that were built for the first time in the city of Tabriz, so if we say that Tabriz is the first city, we are not wrong. The city without beggars, the city of underpasses and overpasses, the safest and healthiest city in Iran, the cradle of Iranian investment and the world city of carpet weaving, are other titles of this ancient city.

People in different cities of Iran all enjoy high food diversity; But in the meantime, the city of Tabriz is famous for its variety of delicious souvenirs in terms of the variety of edible souvenirs, with delicious foods such as Tabrizi meatballs and hair leaf jam, as well as nuts, sweets and dairy products. 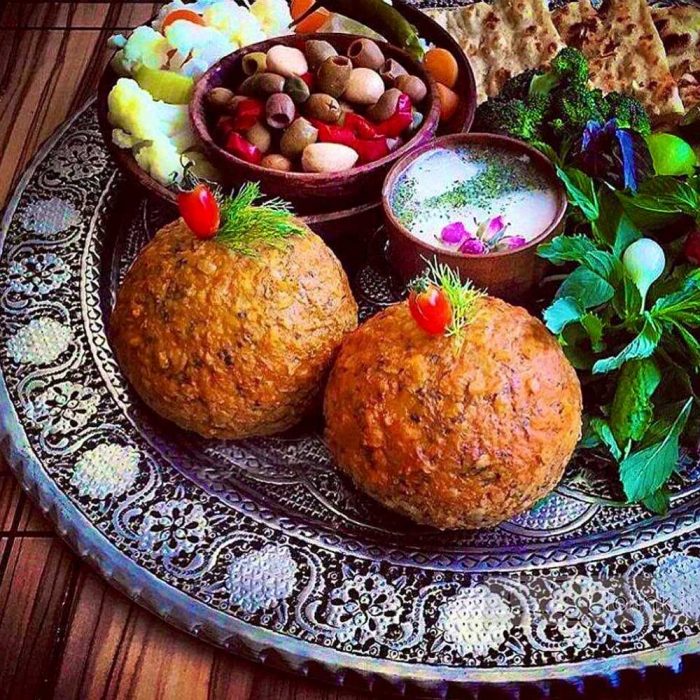 Tabriz sweets with special taste and aroma and high variety to the extent that they include all tastes and flavors, always have many fans among Tabriz food souvenirs. To prepare these delicious sweets, we can visit one of the countless confectioneries in Tabriz and, by buying one of them as a souvenir, we can share our friends in enjoying the trip to Tabriz and its attractions.

In addition to sweets, Tabriz has other products such as dairy products, which is not only the healthiest food souvenir in Tabriz, but also has a high nutritional value. Among the best dairy products in Tabriz, we can mention Liqvan cheese. Cheese, which is the first choice of the people of many cities in Iran, is a pleasant start to the morning.

Among the sweets of Tabriz, Eris, or in the local language, whistle, is more ancient. This delicious dessert consists of pistachios, vanilla, sugar, milk, cocoa, animal oil or butter.

The method of preparing Eris pastry is that after mixing the raw ingredients of the pastry, it is placed in a glazed or copper dish on the heat to boil and finally it has a porridge-like concentration, then it is removed from the heat and the ingredients are put inside. A pre-stretched plastic tray is poured to harden it at room temperature so that it can be cut into small, rectangular shapes. This local sweet is found in two colors, Portuguese and cocoa.

Eris includes a variety of cocoa, milky, crispy and rosary eris, in which sweets are arranged together into large rosary beads, each of which is prepared in two flavors, pistachio or vanilla.

You can find delicious Eris sweets in most confectioneries in Tabriz and give it to your loved ones as a souvenir of Tabriz.

The traditional Nogai sweet, which is called Luca in the local language, is one of the most popular food souvenirs in Tabriz. Some believe that the origin of this sweet actually goes back to the Middle East and Southern Europe, but it is not possible to say exactly in which country the first Nokia was made. Today, in addition to the city of Tabriz, Nokia is produced in countries such as Italy, Spain and France.

Nogah belongs to the Gaz family because it is very similar to Isfahan Gaz. Ingredients for this delicious dessert include egg whites, sugar or honey, walnuts and vanilla. Nougat delicious sweets have a special place in the culture of the people of Tabriz and for many years this sweet has been seen on the Eid table, the celebration and joy of the people of Tabriz.

Noga has become very popular among Tabrizis as well as domestic and foreign tourists due to its high durability, affordable price and fit to the taste of everyone at any age. In Tabriz, Nogha sweets are found in different flavors such as vanilla, cocoa and nuts, in which there are various nuts such as walnut kernels, hazelnut kernels and almond kernels. It is better to taste this tasty sweet with tea to double its pleasant taste.

One of the famous souvenirs of Tabriz is the traditional sweetness of Qorabieh. Qarabiyeh, which is also a type of cake, is made by grinding almond kernels and combining them with eggs, vanilla, sugar and flour, which are then decorated with a variety of kernels; Due to the high use of pistachio kernels, almonds and walnuts in the preparation of this type of sweet, Gharabieh is an expensive sweet and Tabrizis entertain their guests with it or complete their happiness by eating Gharabieh during ancient and religious holidays.

It cannot be said that Gharabieh is only for Tabriz because this sweet is baked in cities such as Qazvin and Zanjan and in countries such as the Republic of Azerbaijan and Turkey.

Among the different flavors of this traditional cake, we can mention the taste of pistachios, coconut and walnuts. There is not much difference between the cooking methods of each of these different types; For example, coconut powder is used instead of almonds.

Majlisi Gharabieh sweets, as one of the best and most delicious souvenirs of Tabriz, will be a valuable gift for your loved ones, and we suggest you try it yourself, because its unique taste will be felt under your tongue for a long time.

There are probably few people who have tasted the delicious taste of baklava and did not like it. This delicious sweet, which first entered the cities of Iran and other countries from Central Asian countries, has many fans around the world today. Among the cities of Iran, Tabriz baklava enjoys a special aroma and taste. Flour, sugar, cardamom, eggs, pistachios and walnuts are used to make the delicious baklava of this city, which is cooked in the style of Turkish baklava. 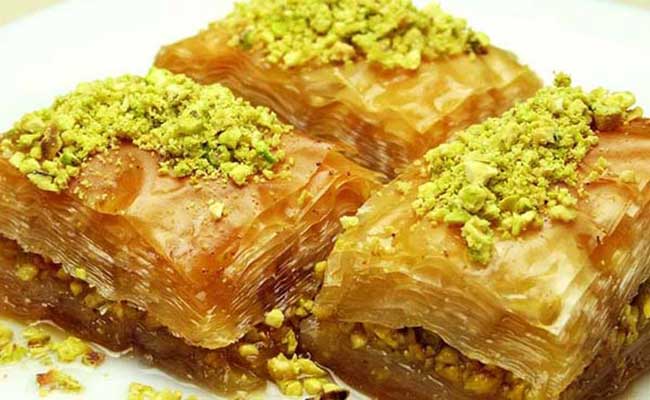 The baking process of baklava begins by stacking 4 layers of dough on top of each other and then continues by adding walnut powder to the layers in several steps and cutting them into desired shapes. Finally, the baklava is placed in the oven to pour the nectar, which is a combination of cardamom, rose and lemon juice, after it is golden. Decorating baklava with coconut powder or pistachio is the last step in preparing this delicious dessert.

Tabriz baklava, which is known as Istanbul baklava, is prepared in pistachio, almond and coconut flavors and has different square, rhombic and tubular shapes. The pleasure of drinking the unique Tabrizi baklava along with a cup of fragrant tea encourages you to give this pure feeling to your friends by buying baklava as a souvenir of Tabriz.

Following the introduction of Tabriz souvenirs, we come across an interesting food souvenir, namely chocolate rosary. The reason for naming this delicious sweet goes back to its appearance; The chocolate beads are arranged in a row, similar to rosary beads, in the same size in two colors, white and brown.

The main ingredients of this chocolate are milk, sugar, milk powder, glucose, baking powder, vanilla, butter and cocoa powder, which we will mention how to prepare and how to combine these ingredients.

To make two-color rosary chocolate, first mix the milk and sugar and place the mixture on the oven heat, bring it to the boiling point, then add glucose to increase the concentration. At this stage, dry milk, baking powder, vanilla and butter are mixed with other ingredients and removed from heat.
Now, to change the color of the chocolate, they add cocoa powder to half of the ingredients, and finally, after hardening and cutting it into a tube, they put the white and brown chocolates in the dish one by one. Because of the good taste of this attractive souvenir, you can be sure that you will become a die-hard fan of it just by trying it once.