The Omidvar Brothers Museum, as the first anthropological museum in Iran, is one of the most spectacular museums in Tehran for travel enthusiasts, because it is the result of years of experience in exploring culture and history and adventure across the planet by two brothers named Issa and Abdullah is hopeful. The Omidvar Brothers Museum, which is the result of ten years of travel by these two brothers around the world, is known as one of the most exciting sights in Tehran. Although there have been many Iranian tourists throughout history, and even hearing Saadi’s name may remind us of his travels in the world, but their number has been declining from the Safavid period to the contemporary era. Isa Omidvar (born 1308 AD) and Abdullah Omidvar (born 1310 AD) were one of the few adventurers in those years in the world who traversed the world in two stages. Their travel collection is collected in a place called Omidvar Brothers Museum in Saadabad historical and cultural complex and has 4 different sections including museum halls, museum works and collections, film and photo gallery and exhibitions and programs section. In the museum halls you can find the itinerary of the Omidvar Brothers’ travels, the collections that the Omidvar Brothers have collected from all over the world, and the pictures that the two brothers have collected from ninety-nine different countries. The two brothers began their first adventurous journey around the world in the early fall of 1333. The journey started from Tehran to the borders of Afghanistan and during seven years of adventure, passed through the countries and regions of Afghanistan, Pakistan, India, Tibet, Southeast Asia and Australia, Alaska, North America and South America and parts of Europe. A 500cc Machells motorcycle accompanied them on this journey.

After this seven-year period, they stayed in Europe for a while to publish research papers and sell them to Citroën (French carmaker) and buy a two-cylinder van, and after a short three-month break in Iran, far away. Second, start their travels in 1340. The southern border of Iran with Kuwait was the starting point of the second round of the two brothers’ travels, during which they passed through Saudi Arabia for three years and toured Africa. During their travels, they visited primitive tribes and made documentaries there. The first documentary they made was Indigenous Australians who lived 2,500 years ago. Documentaries made by the Hopeful Brothers were broadcast all over the world and on various television networks and were very well received. Their 16-hour film was also shown in Iran for ten days, which attracted many Iranians. 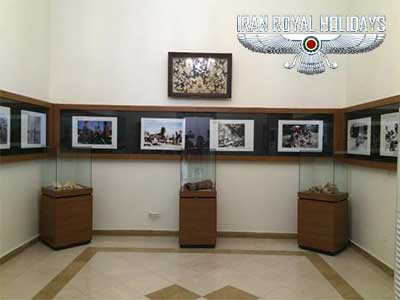 Have you ever wondered where the Omidvar Brothers Museum is? In the 110-hectare Saadabad complex, when you move, a brick building with a red gable view (northwest of Saadabad) stands out, a building full of history and culture of all nations of the world. The museum building was built during the Qajar period and was once used as a carriage house and a resting place for the Surchis. In 2002, this building was renovated and on October 26, 2003, at the same time as Tourism Week, it became the first anthropological museum after the Iranian Revolution called the Museum of the Brothers of Hope. If you also want to see the sights of Tehran, you can travel with Aladdin Travel Tehran tours.

The Royal Clothing Museum is one of the fascinating sights of Tehran, which is located in the cultural and historical complex of Saadabad. The current building of the Royal Garment Museum belonged to Shams Pahlavi, the sister of Mohammad Reza Pahlavi, and its construction dates back to the time of Reza Shah Pahlavi. Construction of the museum began in 1314 and was completed in 1318. The Royal Clothing Museum has an area of ​​2600 square meters, which was built in the northern part of Saad Abad complex with a combined Iranian and European architecture. The Royal Clothing Museum has two floors and a basement, where objects, valuables and gifts belonging to Qajar and Pahlavi kings and courtiers are kept. The Royal Clothing Museum is the most beautiful museum in terms of architecture and is very attractive in terms of the objects and clothes in which it is kept. For this reason, this museum annually hosts many visitors who are interested in seeing the clothes of the Qajar and Pahlavi courtiers who wore them at that time. In this collection, you can see the clothes of men and women of the Qajar period, which include the clothes of the aristocracy and the common people. During this period, kings and women imitated Western customs and culture in the design and sewing of their clothing, and most of their clothing resembled that of Europeans. In other parts of the Saadabad Royal Clothing Museum, you can see the clothes of the first Pahlavi period, which include the Pahlavi hat, Shapoo hat and suit, which became popular in Iran after being modeled on the West. In the Pahlavi period, symbolic patterns and delicate needlework were used in sewing clothes. Embroidered dresses and wedding dresses with beautiful decorations that belong to Farah are also kept in this museum. Also, the clothes of the Pahlavi period that you see in this museum were mostly used as a symbol of Iran’s cultural heritage in the official court ceremonies and cultural festivals of that period, which are now on public display. To see the historical monuments and sights of Tehran, register for Aladdin Travel Tehran Tour and spend happy times with our professional guides.

Saadabad, a large and magnificent complex consisting of various historic mansions and palaces, which today houses 16 attractive museums with different uses and a suitable space for a cultural and historical pastime in a beautiful and spectacular garden for those who like to visit the capital. Has created. The Royal Car Museum is one of the most attractive and beautiful museums in the Saadabad complex, which houses a number of famous products of the world’s car companies that belong to the Pahlavi period. This museum was reopened in January 2012 by the Cultural Heritage, Handicrafts and Tourism Organization in a new location and was put into operation. Saadabad Royal Car Museum is an exhibition of aristocratic cars of the Pahlavi dynasty, and by visiting it, you will see unique and luxurious cars, the example of which you may never see again. This museum consists of two galleries, in the first gallery you can see Rolls-Royce cars and in the second part you can see the Benz car gallery. Between these two galleries, there is a private hall of Mercedes-Benz SL 300, a car owned by Farah Diba and one of the most beautiful And has been introduced as the rarest classic car in the world. Other cars on display include a speedbag, five Benz, six motorcycles, a snowmobile and a stroller. In this museum, you can also see a Mercedes-Benz S600, a luxury car with glass and bulletproof bodies that was used personally by Mohammad Reza Shah Pahlavi. To see the attractions of Tehran, take part in Iran Royal Holidays tours and make memories for yourself in the beautiful capital of Iran.