Travel to mashhad and what visit in there

Get to know Mashhad better with IranRoyalHolidays.
Mashhad is one of the tourism hubs of Iran, which receives more than thousands of people annually. The presence of the shrine of Imam-Reza and many spectacular, historical and recreational attractions have made this city one of the most touristic cities in Iran, which is visited by many people from Iran and even outside Iran.
This city, which was the capital of Iran during the Afshari era, is the second largest city after Tehran. In different historical periods, due to its suitable geographical and natural location and the presence of great celebrities of Mashhad, it has always been considered.
Mashhad is called the spiritual capital of Iran and the most important religious place in Iran, the shrine of the eighth Shiia Imam, is located in this city. In addition to the religious and pilgrimage aspects of this city, it has also made significant progress in the aspects of tourism and has various historical, recreational and cultural complexes and can be an interesting city for tourists.
Due to the large number of travelers of all ages to visit Mashhad and the pilgrimage of Imam Reza, the variety of choices for a planned trip, taking into account all the elements of travel such as a suitable hotel, transportation costs or foods are a little higher than the other cities. To achieve this goal, IranRoyalHolidays make it easier to travel to this city. 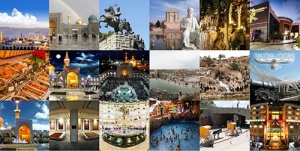 WHAT TO VISIT IN MASHHAD city?

1-IMAM REZA HOLY SHRINE
The shrine of Imam Reza in the center of Mashhad, Khorasan Razavi province, Iran, is the court of Hazrat Ali ibn Musa al-Reza, which is revered by Shia and Sunni Muslims and is sacred. The site includes mosques, tombs, shrines, courtyards, a library and museums. The structures of this holy shrine have survived from the pre-Safavid period of Timurid and numerous historical periods, but during the reign of Shah Tahmasb Safavid, a lot of work has been done to expand the shrine, so this holy place is large museum of Iranian architecture.

Sometimes one or two day trips to Mashhad are made only for visiting the royal court of Imam Reza. For such a short trips where the traveler does not prefer the tour and wants to arrange his own travel plan, it is only necessary to get a ticket or there is lots of budget tour in Iran.

2-THE TOMB OF SHEIKH BAHAI

The tomb of Sheikh Baha’i, a prominent scientist of the tenth and eleventh centuries AH, is located inside the holy shrine of Razavi after the porch of Imam Khomeini with a stone mausoleum and a glass cover. The tomb of this scientist before his death was also his teaching place and has an area of about 102 meters, which is decorated with many mirrors and calligraphic inscriptions. The tomb’s inscriptions date to his birth and death.

3-ABBAS GHOLI KHAN MADRASA
Abbas Qoli Khan Shamlou School was built by Abbas Qolikhan Biglerbigi by order of Shah Suleiman the Safavid in 1045 AH. This school, which is registered in the list of national monuments of Iran, is located at the beginning of Safavi Street. The school is currently used as a seminary. The school building is built on two floors and on four sides with four porches in the style of Safavid architecture, which has more than 100 rooms. The school is made of bricks and has decorations such as tiles, carvings and moqarnaskari at the entrances of porches and rooms and porches. This school is one of the architectural works of Mashhad, which is under the supervision of the Khorasan Cultural Heritage Organization.

The Green Dome is the tomb of Sheikh Momen Astarabadi, which dates back to the Safavid period. The plan of the green dome is octagonal and has four porches. In addition to the porch and arches, its beautiful tiling has given the tomb a special look. This historical monument is located on Akhund Khorasani Street in the middle of the square of the same name. The Green Dome, built by order of Shah Abbas, has been registered in the list of national monuments of Iran.

Chalidareh is one of the most attractive and touristy areas around Mashhad. Chalidareh Dam Lake was built to irrigate the gardens around Torqabeh and has recreational facilities such as boating, fishing and restaurants. This earthen dam is filled by the Jagharq River.

6-FERDOWSI TOMB
The tomb of the Hakim Abolghasem Ferdowsi Tousi is located in the middle of the Musafa Garden, 20 km north of Mashhad. The current building of Ferdowsi Tomb and Toos Museum, which was inspired by the Achaemenid architecture, especially the tomb of Cyrus, was commissioned by the National Monuments Association in 1343 and supervised by Engineer Houshang Seyhoun in 1347. The exterior of the building includes Achaemenid decorative elements, especially columns and capitals, and the poems written on the four sides of the building are by Hakim Ferdowsi and represent his thought and personality. The upper part is made hollow and its interior space, in addition to being inspired by Parthian architecture, includes 20 marble columns at the bottom and 8 columns is at the top. In some parts of the tomb, murals by Fereydoun Sedighi have been installed , which show scenes from the Shahnameh narrations.

Kuhsangi Park is the second largest park (after Mellat Park) in Mashhad. This park is located in the southwest of Mashhad, at the end of Koohsangi Street. Kuhsangi Park is located on the edge of high mountains and is one of the oldest villages in Mashhad. Kuh-e Sangi is one of the most famous resorts in Mashhad and is one of the most beautiful parks built in Iran. The park is a combination of water, rock, greenery and light. In 1940, with the expansion of the city of Mashhad, Kuhsangi was connected to the main body of Mashhad through a wide, wide and wooded street, called Kuh-e Sangi Street. With the development plans of Mashhad, Kuh-e-Sangi Park became a recreational tourism complex.

Goharshad Mosque is located in the south of Razavi shrine. This mosque was built by the order of Goharshad Begum, the wife of Shahrokh, near the shrine of the Eighth Imam and is one of the most visited and crowded mosques in Iran. The architecture and tiles of this mosque are famous and attract many tourists.

Nader Shah Afshar’s tomb is a monument built in memory of Nader Shah in Mashhad. Qavam al-Saltanah built a new tomb for him at the end of the Qajar period (1296 A.D.) on the site of one of Naderi’s ruined tombs, and transferred his bones from Tehran to the tomb. This small tomb was built in 1145 AH near the royal garden and in front of the shrine of Imam Reza from clay and mud. This new building, which was located in the current location of his tomb, was erected for some time until the Iranian National Monuments Association in 1335 sought to build a suitable tomb for him in the same place as the tomb of Ghavam al-Saltanah. This work started in 1336 and ended in 1342. 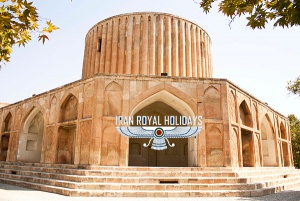 Mehdi Gholi Beyk Bath was built by the Timurid rulers and is located near the Grand Bazaar of Mashhad. The bathroom has now been converted into a museum.

The saint Mesrop Church, the only church in Mashhad, was built by Armenians living in Mashhad on the 10th of Dey Square. The building dates back to the first Pahlavi period. The building has two conical domes, with a cross at the top of both cones, and is a distinctive and unique feature of the building. The larger dome is in the middle of the building and the cross mounted on top of it is made of iron; there is a row of white tiles under the dome, which is engraved with a green flower.

Reza Bazaar, which is located a short distance from the holy shrine, has been named one of the busiest and most visited traditional markets in the country. In addition to its beautiful and traditional architecture, this market is one of the oldest souvenir and handicraft supply centers in Mashhad.

Malek’s house belongs to the late Qajar period and is located in Mashhad, on the eastern side of Imam Street, in front of the Finance Office. This building is one of the examples of beautiful houses left over from the architectural transfer period in the late Qajar era. Today, Malek’s house is the center of traditional arts, cultural heritage and tourism of Khorasan Razavi.

Vakilabad Park is one of the old and beautiful promenades in Mashhad, which is located in the southwest of Mashhad and at the end of Vakil Abad Boulevard. This forest park, formerly known as Mir Ertaz or Bagh-e-Vakil-e-Abad, was officially handed over to Mashhad Municipality in 1348 by its owner, Hossein Mr. Malek. Vakilabad Zoo is the only zoo in Mashhad that is located next to Vakilabad Forest Park.

Mashhad has a unique position in the construction of water parks in the Middle East. One of the special sports attractions in Mashhad is the existence of water parks, which can be used all year round due to their indoor use. Iranian Water Park, Land of Water Waves, Aftab Coastal Park and roaring waves are equipped with water parks that have many fans in Iran.