Almost no one can be found who does not dazzle the splendor of precious metals and the color and radiance of precious stones such as diamonds, rubies, pearls, turquoise, door, agate, etc. .; And meanwhile, the National Jewelry Museum will dazzle our eyes and nail us; In a way that will be very hard to break. This is the most expensive museum in all of Iran and of course the most expensive objects are kept in it; among the famous diamonds of the Sea of Light, which is said to be the main backbone of the national currency of Iran (it is worth tens of thousands of billions of Tomans alone). Nasser al-Din Shah, who knew the value of this 182-carat diamond, had appointed a special position for the “tutelage” of the Sea of Light, and left this serious job only to the nobles and elders of the country. The stunning beauty of diamonds, which alone can give credit to the most valuable museums in the world and can provide a museum on its own, can be seen from hundreds and thousands of other brilliant jewels, from a distance of less than half a meter. The Sea of Light, of course, is not the only asset of the National Jewelry Museum; it is only a small part of it. 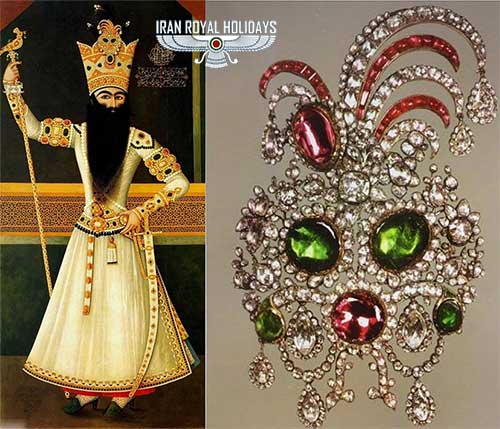 Many jewels and of course many swords, crowns and jewelry beds can be found in this museum that is not found anywhere in the world like them and they shine so brightly under the lights of the museum that they look more beautiful than any beauty. The National Jewelry Museum is, of course, essentially the Central Bank’s jewelry treasury and is open to the public. Unlike other museums, this museum is not advertised much (because there is basically no need to advertise such treasures) and of course the conditions for entering it are very strict in terms of security; But it is worth the effort and it is an experience that is impossible for tasteful and jeweled visitors to forget for the rest of their lives.

On arrival, “Takhtavous”, the throne of the Qajar kings with pure velvet and thousands of jewels installed on it, welcomes you. Just two of the wonders of the National Jewelry Museum, the valuable backbone of the national currency, are as follows: 50,000 pieces of jewelry (you read that right); And show each of the geographical elements with a different jewel; Including the city of Tehran, which is shown with a diamond known as Aurangzeb. Another object is the Pahlavi crown, which weighs about 450 ounces, or over two kilograms, and was made in 1304 under the supervision of the world’s most famous jewelers, in which 3380 pieces of diamonds, five pieces of emeralds, two pieces of sapphire and 368 pearls were used. Aladdin Travel wishes you a thrilling and exciting visit to the Royal Jewelry Museum.
Some famous pieces
Jewelry and pieces in the National Jewelry Treasury are classified into 36 closets. The contents of these closets are very diverse and mainly include all kinds of decorative ornaments, all kinds of crowns and half-wedges, all kinds of jacquards, vases, food covers, hookahs, mirrors, enamel straps, candlesticks, turquoise, swords, daggers, shields, watches, and pens. , Snuffers, objects adorned with rubies and pomegranates, guns, canes, medals, beds, pins and brooches, pearls, etc.

Sea of Light (Daryay e Noor)
This diamond may be the first among the national jewelry of Iran. This famous diamond and the Kuh-e-Noor diamond, apparently due to the closeness of the name, have always been considered a couple, while they have nothing in common in terms of cut and color. Both gems belonged to Nader Shah, but the diamond of Kuh-e Noor was taken to Afghanistan by Ahmad Shah Durrani after Nader Shah’s death. It was later presented to Queen Victoria in India by the East India Company. The gem is still on the crown of Queen Elizabeth, the current Queen of England.
After the assassination of Nader Shah, the diamond of the Sea of Light passed to his grandson Shah Rukh Mirza, then to Amir Alam Khan Khazimeh and later to Lotfali Khan Zand. When Lotfali Khan was defeated by Agha Mohammad Khan Qajar, the gem was transferred to the Qajar jewelry treasury.
The Sea of Light later became part of the State Museum and now adorns the National Jewelry Treasury. The sea of light weighs 182 carats and its color is pink, which is the rarest color of diamonds. 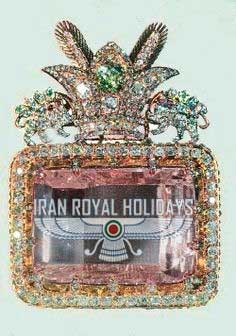 In 1344, while studying national jewelry by Canadian scientists, a very interesting point was discovered about this gem:
Tavernier, the famous French traveler and jeweler, in his book speaks of a pink diamond weighing 242 carats and mentions that he saw it in the east in 1642 AD and describes its map and dimensions in the book. He calls it the Grand Table Diamante. The color and shape of this diamond attracted the attention of Canadian scientists and they believe that the diamond of the Sea of Light and Noor Al-Ain was originally a piece of diamond and later it was divided into two pieces, the large piece is called the Sea of Light and the small piece weighing 60 It is carat, it is called Noor Al-Ain and it is currently located in the middle of the half crown of No. 2, closet 26.
Pahlavi’s Crown (Taj Pahlavi)
This crown, which was made in the shape of the crown of the Sassanid kings, was used by Reza Khan and Mohammad Reza Pahlavi. This crown is made of gold and silver and adorned with high quality diamonds, large emerald seeds, sapphires and pearls. The crown cap is red velvet and is located in the dome in which the emerald seed of the cucumber is held.
The crown that was previously used in the coronations of the Qajar period was the Kiani crown, but Reza Khan Pahlavi did not want to use it in his coronation. Therefore, in 1304, a group of Iranian jewelers, under the supervision of Sirajuddin Javaheri, the famous Caucasian jeweler and jeweler Amir Bukhara, who had emigrated from Russia to Iran, made the crown from selected gems, and Reza Khan and Mohammad Reza Pahlavi, for the crown. Have used it.
Taj Kiyani
The crown of Fath Ali Shah, known as the crown of Kiani, is adorned with diamonds, emeralds, rubies and pearls. This crown was built during the reign of Fath Ali Shah and was used by Qajar sultans.
This crown is the first crown that has been made in this way after the Sassanid Empire.
Peacock throne (sun bed)
By the order of Fath Ali Shah in 1216 AH, a huge and luxurious throne was built under the supervision of Nizam al-Dawlah Mohammad Hussein Khan Sadr Isfahani, the ruler of Isfahan, with jewels and gold in the treasury. Became famous.
The throne was called by the same name for many years until Fath Ali Shah married the peacock Taj al-Dawlah. From that time on, the throne became known as the Peacock.
The mentioned bed was kept in Golestan Palace Hall until 1981. On 6/17/1360, it was transferred to the jewelry treasury of the Central Bank of the Islamic Republic of Iran to be kept in the treasury (subject to the law of 1316 AD) due to the homogeneity of this bed.
Any piece of jewelry or jewelry that needs to be repaired is repaired in a workshop above the museum.