Turquoise stone use date in Iran

In Iran, for many centuries, this country has been widely used to decorate objects, mosques and many important buildings inside and outside the country. This Iranian method of construction later found its way to the IndiaN subcontinent, and turquoise was used in the construction of the Taj Mahal. And this color was considered a symbol of God’s paradise on earth. Archaeological excavations in Central Asia show that Iranian turquoise has been found in the graves of the wealthy in the region and throughout the Caucasus.

One of the most important archeological finds in northeastern Iran in the Tower Hill area around the historic Neyshabour mine is a 45-year-old skeleton woman who was found with a piece of perforated turquoise stone near the back of the skeleton. 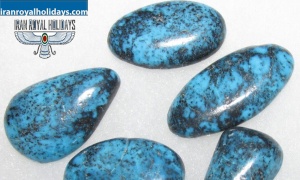 Throughout history, Iranian turquoise-shaped egg-shaped grains have been used to make jewelry and workpieces. It is said that due to the lack of processing technology, this valuable stone is now exported raw from Iranian mines to Turkey and after cutting and processing, it is offered to the world as Turkish turquoise stone, and countries such as China, India and Italy also try to get the business center of this beautiful stone.

Turquoise mineral of liquid and aluminum phosphate with a distorted crystalline structure, opaque and waxy transparency and hardness of 5-6 degrees on the MOH scale .MOH is a scale for determining the hardness of stones from zero to ten, the hardest of which is a diamond with a hardness of 10.

This rock is formed under the influence of acidic solutions in the aquatic environment and is found in the form of compressed masses or separate streaks inside the rock crevices in the form of round or rubble.

The best climatic conditions for the formation of this rock are dry areas. The gem is usually found in areas where rocks are left over from volcanic activity or global warming has contributed to its formation.

Turquoise is a rock with a porous texture, and the lower the porosity and bubbles inside the stone, the higher the purity, and therefore the harder and stronger it is, and the less likely it is to break or crack for initial extraction or cutting. Due to the many pores in this stone, copper and aniline salts can be used to brighten it.

Turquoise is identified and exploited in different parts of the country, including Neishabour, Baghu (Damghan), Allahabad and Yakh Abad (Kashmar), Midok and Firoozeh wells (Babak city), depending on their quality and economic value. Neishabour Turquoise Mine is the oldest and most important mine in the country and has a special reputation in the world. Neyshabur has long been an important city on the Silk Road, linking the Iranian plateau to Central Asia on the one hand, and the Anatolian Plateau and the Mediterranean coast to China on the other. These mines are located near an old route that used to be a transit point for trade caravans in ancient times.

Turquoise is sometimes difficult to detect in nature. For example, in Iran, variscite stones are very similar to turquoise, but with a relatively green color. Chrys and colla is another mineral that has a similar color but is recognizable due to its lower hardness of 2.5-3.5.

On 5th of August 2019, on of IRAN ROYAL HOLIDAYS clients Mr. John and our tourguide flew from Tehran to Mashhad on a Mahan Air flight. Our tour guide wrote the details about the turquoise:  Fortunately, the flight was not delayed. After an hour and a half, we arrived at Hashemi Nezhad Airport .we stayed at the Diamond Hotel in Mashhad, which was almost close to the shrine of Imam Reza.

We arrived at the hotel after about 20 minutes because Mashhad is the second largest city in Iran. Unfortunately, we are always busy with traffic. We entered the hotel and after taking the keys to the rooms and taking a short break, we decided to visit the shops around the hotel.

Most shops sell Mashhad souvenirs, including silver and turquoise.

Mr. John was very interested in decorative stones and also wanted to buy turquoise, and he came to Mashhad mostly to buy turquoises so we planned a short trip to Neyshaboor .

8 in the morning, Mr. John and I took a taxi to Neishabour. The distance between Mashhad and Neishabour is 118 km, which is about an hour and a half.

We arrived at 9:30 and went straight to Khayyam Street to buy turquoise.

Like the color of turquoise that he said:
In fact, blue is a sign that helps you recognize the best turquoise in Neishabour. In this case, he pointed to the presence of a high copper element in turquoise, which indicates the high quality and greater resistance of turquoise stones and jewels, and adds to the quality of this precious jewel.

Mr. John found the stones he was looking for and bought them at a reasonable price and he was very happy and satisfied. We returned to Mashhad from a trip to Neishabour after lunch and a little tour of the city.

Mr.John was happy because finlay he had his favorite stone with the best price and he visited another city too.